We can all be Dorothy 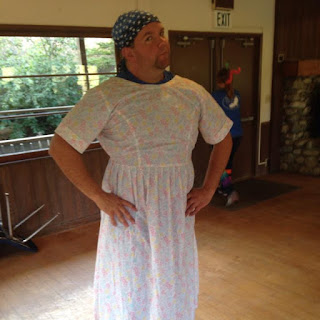 So like many my age, 9/11 brings back some very vivid memories.  I recall exactly where I was and how the day unfolded.  September 11th is my birthday and I was at work.  I at first thought my fellow staff telling me I had to come see the tv (my pager didn't have internet or news updates!) was a ploy for a party.  Once I realized what I was seeing on tv was real, my world changed.  I spent the evening at Buffalo Wild Wings with family and friends as planned.  We almost cancelled but chose to continue not to celebrate my birthday but rather to watch the coverage on their numerous big screen televisions.  So we sat there for hours on $.50 wing night in an almost empty restaurant watching the footage we had all already seen.  Waiters and cooks joined us.

We were Americans and we knew our world had just changed.

Here I am in 2019 and I can barely remember what I had for dinner a fortnight ago.  Yet, I remember the sauce I chose for my hot wings (honey bbq), I remember how my potato wedges looked in the food boat (why do we call it a boat!?), and I remember the scrolling screen saver on the Daytona racing game I would look at to take a break from the news channels.

Science tells us the difference is dopamine.  There is a chemical in our brain that alerts us that something has happened and we need to pay attention.  For sure, 9/11 was such an event.

My brain was screaming, "Pay attention!  Your world is changing!"

And it did change.  I watched my country deal with terrorism.  I saw how airport travel changed, saw people's prejudices harden, and saw people live differently.  My kids began having terrorist shooting drills in their schools, my work developed an evacuation plan, and on the home front I stepped away from a ministry I had been volunteering with that worked in Rwanda.

After the initial shock I had opportunity to visit the memorial in New York.  I became captivated by shows such as Rescue Me.  My son and I even joined a local volunteer fire department where I still serve.  I don't know that 9/11 is "the" reason I joined, but it was definitely a significant factor.  9/11 became part of the ever playing soundtrack in the background of my life.

What if your 9/11 event was not nation wide?  What if the event that traumatized you was local?  Maybe in your home?  And maybe you were too young to even process what was happening, but you will forever remember the flavor of the hot wings, the texture of the potato wedges, and the screen saver on the racing game?  Or maybe for you it is the taste of a grilled cheese, the slamming of a door, or the cartoon that was playing on a tv.

I became involved several years back with a few people who work with children who have reactive attachment disorder.  They put on camps to help not just the kid, but the entire family (often adoptive parents or foster parents but not always) "reset."

RAD means a child has barriers to building relationships.

It is a horrible cycle.  The belief is "no one can love me and I'll prove it."  It breaks my heart.  But after 9/11 I remember thinking, "I'll never be safe again."  Intellectually, I knew that was false.  But in my emotions I was forever changed.

At the end of each camp we put on a play as the staff.  A version of the Wizard of Oz.

And yes, that is me in the dress.

The lead would go through the skit seeking a brain (gotta know what is happening to make you scared), courage (gotta be willing to risk change), and a heart (love is the answer).

I know because I am a history nerd that the original Wizard of Oz was about a political election.  It was great satire.  However, I can't help but feel the camp's production of the Wizard of Oz was a perfect modern update.

On this anniversary of 9/11 I would challenge us to look for those around us who we can help.  We can help by teaching, by encouraging, and by loving.  And you don't even have to wear a dress.