What if the Aztec Gods Visited Siverdale Prison? 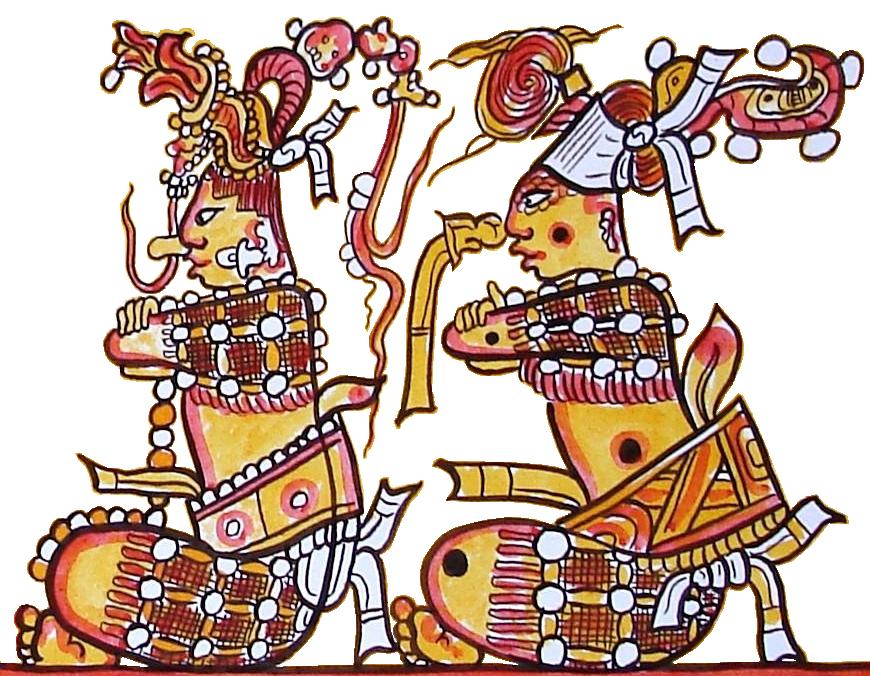 I've been working on a story that has truly peaked my interest.  In my classroom I teach ancient civilization creation stories.  One of my favorites is the Mayan encounter, even though I have to keep the "PG" version front and center.  I have no idea where the story will find a home, but like the idea of the different gods that lead Mayan Civilization into creating the world each getting an hour to run Silverdale Penitentiary.  Here is the first chapter (8:00 pm)  Would love your thoughts or comments in the blog or by email.  jerryharwoodbooks@gmail.com

Eli had been in for less than seven hours when the flaming mattress was tossed over the second floor balcony.  Eli arrived earlier that day with two other inmates.  One, set in an adjacent cell had been all the talk.  Eli had seen him during entry as the men changed to their issued uniforms.  Eli had considered the large hummingbird tattoo with the wings flowing across the man’s back and down his arms to be sissy and effeminate.  Eli had been set in cell 38.  The other two new inmates, including the one with the tattoo, were adjacent in cell 37.  The guards paraded by Eli’s cell often that initial afternoon.  But his cellmate assured him their slow gate pass cell 38 was really to see the man everyone knew as Hummingbird one cell over.  Not seeing the attraction, Eli settled in his cot for his first night of sleep in Silverdale Penitentiary.

Hummingbird had managed to wedge his door open during the final night check.  Eli recalled the sound of the first alarm, notifying guards that not all cell doors were closing.  There was a general uproar in the fifty cell facility, twenty upstairs and thirty downstairs.  Downstairs, affectionately called the courtyard, opened the entry doors as guards began yelling for inmates to stay in their cells.  The guards on the second floor began rattling their batons along the cell walls as they walked the line to see who had jammed a door.  It was then that Eli saw the mattress engulfed in flames fly out of Hummingbird’s cell.

An announcement was made over the intercom instructing all inmates to remain in their cells.  A beep followed by cell doors reopening and attempting to close.  Eli heard the footsteps outside as a guard approached. The guard’s baton raked the side of cell number 38.  In cell 37, the Hummingbird exited.

“Get back in your cell,” came the guard’s voice.

Eli jumped down from his top bunk.  He remained away from the cell door to avoid giving any intention of leaving.  He wanted no part of this altercation, but he also didn’t want to miss out on his opportunity for a front row seat to an altercation.

“I said get back in your cell.” The guard said to Hummingbird.

The guard pulled out a Taser gun.  Eli could not see Hummingbird directly with the guard stepping between Eli and the other inmate.  The guard stepped toward Hummingbird.  There was a loud crack and the hum of an electric current.  Then the guard’s body went limp.

Hummingbird held the limp body aloft and moved toward the balcony guardrail.  He was shirtless and  the hummingbird tattoo stretched from shoulder blade to shoulder blade.  It was all black ink with a little grey shading.  On his leftt arm was an arm length tattoo of a flaming sword.  Eli could not remember seeing that tattoo previously.  The sword looked as if it had serrated teeth and had some poorly done yellow tinting along the blade.  The Hummingbird had all the appearances of Chattanooga’s citizen of the year.

The Hummingbird, dropped the guard on the floor and stepped out of sight of Eli into cell 37.  Eli next saw another prison mattress cast down to the courtyard in flames.  Eli backed up into his own cell a bit, seeing how easily Hummingbird cast the heavy mattress over his head.   Burnt fibers descended to the man’s bare skin.  He did not flinch.

“Return to your cells.” Came a voice over the intercom.  Eli heard the note of fear and desperation in the intercom voice.  A body, Eli assumed it was Hummingbird’s cellmate, was lifted as easily as the mattress by Hummingbird.  Eli could not tell if the man was alive, but supposed it would not matter.  Hummingbird tossed him over the guardrail presumably on top of the two burning mattresses.

There was a raucous yell by other inmates that echoed through the prison.  Eli heard footsteps on the metal catwalk outside the cells.  Many prisoners were exiting their cells to see what was happening.  Eli remained behind his bars even as he peered out the open cell doors.  Hummingbird’s debut at Silverdale Penitentiary was not yet finished.

Hummingbird pulled the fallen, disheveled guard up to his feet.  The guard was regaining consciousness and protested with weak kicks and a scream.  Hummingbird reached behind the guard and released the buckle on the protective vest.  The vest dropped.  Then Hummingbird pushed the guard into the railing of the balcony.  The arm with the flaming sword grabbed the guard’s shirt and ripped it down the middle.  The guard’s overweight belly bounced as it was exposed.

Eli heard other voices.  Some were the taunts of prisoners, others additional staff that had entered to regain order.  The intercom continued to advise all prisoners to return to their cells and remain on their bunks.

Eli knew the next moment happened in seconds.  However, in Eli’s mind it replayed in slow motion and in high definition.  Effortlessly, Hummingbird lifted the overweight guard off his feet, using the balcony rail to shoulder some of the burden.  The guard’s feet jerked to find purchase on the metal walkway as Hummingbird held him aloft with his right hand.  Eli could have sworn the guard looked at Eli, pleading with his eyes.  Hummingbird’s back was to cell 38 and Eli saw the wings of the hummingbird tattoo were lifted as if in flight as Hummingbird’s muscles tensed.  Hummingbird’s left arm extended, holding the guard up by his shirt collar.  The left arm with the flaming sword tattoo raised a cupped hand.

The tattoo on Hummingbird’s back filled with a bright crimson red as if the blood from the guard was moving to Hummingbird’s back and completing the design.  The guard continued to look at Eli, his eyes begging for mercy.  Eli felt a baton to his own back.  Someone behind him yelled at him to return to his cell.  Eli stepped back into the cell.

Hummingbird’s hand pulled away from the guard’s chest.  He dropped the guard’s body to the floor and raised a beating heart high in the air.  The guard who had hit Eli dropped his baton, turned, and ran.

A few prisoners entered into Eli’s scope of vision after leaving their own cells.  They picked up the guard’s corpse, and threw it over the railing.  Eli would learn later that inmates on the bottom floor were rapidly adding their mattresses to the fire.  The cellmate and now the heartless guard were roasting on a makeshift pyre.

Hummingbird laughed and raised the heart as high as he could.  It was still beating as Eli heard the most terrifying words he could have ever imagined.