The Arch Emulator and the Seven Keys 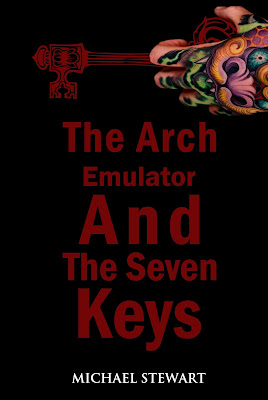 Today, we have an opportunity to talk to Michael Stewart.  Stew has written the book, The Arch Emulator and the Seven Keys.  First, let me thank you for joining me.  I appreciate you giving me your links and I want to share those with our readers.

That is great. Can you tell us a little about yourself and what led you to start writing?

When my wife started working overnight shifts at the hospital, I would get scared being home alone at night with the kids. I’m a wimp. I tried to bottle my fear into a scary story. The simple act of sitting down and writing a scene was incredible the first time I tried it. I was hooked and I have loved writing ever since. It’s an amazing experience to sit down and find out what your characters are going to do by watching the words appear on the screen. I never knew writing could be like that. I always assumed writers think of a story then write it down, but no, for me I’m finding out what happens after my fingers punch out the words. So much fun.

"Writing is a craft, not simply a natural talent. The more you write and the more you read then the better your writing becomes."

I remember watching Lee Childs in an interview. He said his editor came to him and asked him, “Wouldn’t it be more interesting if this character did this instead of that?”. Childs replied, “Yes it would be more interesting but that’s not how it happened”. That’s how it feels when I write, it’s like watching a movie or reading a book, the story just happens.

My book ideas always start out as some single but profound idea that I build a whole story around. I once heard that there are reportedly seven people in the world at a given time that have the mysterious stigmata (spontaneous wounds of Jesus). At the time I had thought, why seven? Maybe those people will have some future importance, there could be an ancient prophecy that says that each of the seven will be on each of the continents during the apocalypse to shepherd the people through the end of the world. That was it, that was the simple idea that turned into The Arch Emulator and the Seven Keys.

I remember watching Lee Childs in an interview. He said his editor came to him and asked him, “Wouldn’t it be more interesting if this character did this instead of that?”. Childs replied, “Yes it would be more interesting but that’s not how it happened”. That’s how it feels when I write, it’s like watching a movie or reading a book, the story just happens."

That sounds like a cool achievement. What other public speaking opportunities have you done?

I also had the opportunity to speak at the first annual TEDx-Topeka. What I’ve learned from writing speeches, that I’ve tried bringing over to my novels is that I’m not very funny when I try to be. Instead of finding the comedy, I need to let the comedy find me. I found the best way to write, is to write straight, then boom, somewhere along the lines I get smacked upside the head with something funny. Usually way funnier than something I could have consciously thought of. That works for me. It probably doesn’t work for everybody but give it a try.

That's good self-discovery. What advice would you give someone who wants to be a writer? 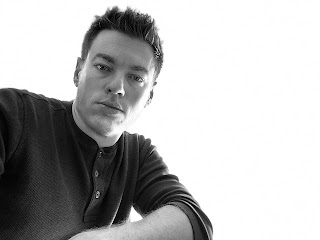 I like to write in spurts. Once I start building momentum with a story, I don’t ever want to stop writing. The story races in brain as my typing fingers try to keep up. I have a fulltime job and six kids. I bring my laptop with me everywhere. If I’m picking up my sons from football practice and I’m waiting on them for five minutes, then that’s five minutes I can be typing in the laptop. If I’m waiting in the lobby of the car mechanic for 30 minutes while my tires are being rotated, then that’s 30 minutes I can be typing. The perfect time and place to write will never come if you wait for it. I need to squeeze it in where I can. But regardless of your situation, bring the laptop everywhere. Bonus tip: don’t wait for inspiration. There is no such thing as writer’s block. Just start writing, regardless of how you feel at that moment, it’s only after you begin, when the inspiration sneaks into the room.

I like to write because I like to see how the story unfolds. I might start out with the broad strokes in my mind, but the act of writing is like watching a movie for me. Very rewarding, but more than that, what I love is creating a story that ultimately brings enjoyments to another person. It is the greatest reward in the world.

It’s a Goonies/Indian Jones style adventure like what I grew up watching. A murderous cult hunts down innocent people known as emulators while they’re in search of a powerful artifact, the seventh key. It plays out from the point of view of four different characters with intertwining journeys: McCoy, a quipster locked in a cell with a journal; Kim, a teenage genius with a secret; Cana, daughter of a murdered archeologist; and Belle, a thick-skinned driller that falls in love in Antarctica.

Later that night was when I found it in the sky. A speck of light no brighter than a star, but I could tell it was moving differently than the other dots in the night sky. This was much closer. I took some initial measurements and did some rough preliminary calculations. As I told you, I know planetary physics, and when I say “I know” something, trust me I KNOW it. Planetary physics or Kepler Mechanics as we call it, was one of my passions.

After two simple measurements of the object’s position, spaced ten minutes apart, along with referencing NASA’s website to find earth’s current position in the solar system at the time of the measurements, I was able to get a rough trajectory plotted. At the time I couldn’t be sure what I had found. I would need to follow up the measurements with days’ worth of data to fine tune the trajectory and plot a more accurate course.

But all that extra measurement did only one thing. It confirmed my initial fear on that night was correct.

In 46 days, the object, an asteroid, would come from the direction of the constellation Aries and impact earth.

Thanks. Who are your favorite authors? Any you draw from as you write?

Michael Crichton, Blake Crouch, and Andy Weir to name a few. I’m an engineer, so I really like the sciencey stuff and cutting edge technology. I also love a good old-fashioned adventure, and these authors never disappoint. Which is also why I like to write fun adventures.

Sphere by Michael Crichton is one of my favorite books. I never really hear anyone talking about it, even when they are listing off Crichton favorites. Perhaps because the movie was not very good. The book has it all: suspense, action, intrigue, mystery, and best of all, the claustrophobic feel of being trapped in a tight underwater habitat. Not unlike the movie The Abyss which happens to be my favorite underrated movie. Way to go, James Cameron.

World building. My novels take place in real places with real people. I sometimes will add some light magical elements, but I’ve never created a whole alien world, or a future with self-lacing shoes. It’s all very intimidating to me. I think I want to try it someday because it sounds like a hoot.

HERE IS MY REVIEW:

This book takes some of my favorite parts of classics.

The Stand – I loved how the Stand began with all sorts of individual stories. As the main story progressed, most of the individual stories joined the main plotline. The same was true here. We meet a man coming home from Seder, Harrison and Felipe in Western Iraq, a girl jealous Jerk (I mean Jack) Dexter who ousted her first prize at a science fair.

The Golden Compass – Everyone seems to be moving (intentional or unintentional) to the same locations. As they do, the world’s magic system is unveiled. Stewart does a good job both creating the world and drawing us into it. There are emulators and a hunt for the keys.

Angels and Demons (or most Dan Brown novels) – The intrigue takes the characters all over the globe from Antartica to Hawaii to a trip inside Air Force One. The seven keys gives plenty of action and chase scenes to move the plot.

Hail Mary – The science in the book is well researched or well known by the author. The spectacular elements are great, but never fully cancel out the known world to a reader. I like those kinds of stories. Just enough new to engage without having to suspend my disbelief of the world I live in.

Stewart’s work is unique, but anyone who enjoyed one of the above works should enjoy this one. A good read.