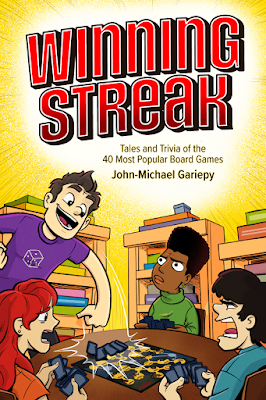 Tales and Trivia of the

40 Most Popular Board Games.

So I went over to the website, popcornroulette.org, and found it a fun site to peruse. I especially got caught up in the discussion about "Can Lobsters be Immortal."  Our readers can check that site out here:

But today we are focusing on promoting your book, Winning Streak: Tales and Trivia of the 40 Most Popular Board Games.

The Book Landing Page is: www.winningstreakbook.com

Can you tell us a little about yourself and what led you to start writing?

I was always a creative kid who liked to entertain. So I spent a lot of time in theater groups and singing in choir. I went to college for dance, and was pretty good at it.  You’d never know it now because I’m such a big guy and terribly out of shape.  But if you threw a pair of tap shoes to me, I’d tap circles around you until I start gasping for breath.

At some point in college I picked up writing and began to understand I was on the wrong path.  I wanted to create my own stuff instead of replicate other peoples’ work.  It would take years before I had enough experience to choreograph, so I put down the tap shoes and picked up the pen.  I admit, there’s a part of me that wishes I stuck with it.  A decade seems like a much shorter amount of time when you’re in your 40s. 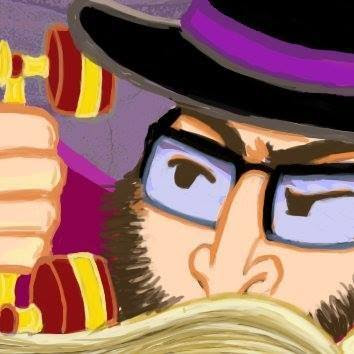 Yes it does. I won a writing award in High School and swore writing would be part of my life. But I didn't pick it up as a serious hobby again until I was in my mid-forties  Now, I usually ask if people have hobbies and how those play into their writing. However, your hobby seems to also be the subject of your work?

I’ve always been fascinated by board games. Ma wallpapered houses for a living, she’d drag me along, and I needed to find ways to entertain myself. I’d put together puzzles, read children’s encyclopedias as literature, and play a lot of board games by myself, keeping score for each ‘player’.  Classic games like Monopoly and Upwords, as well as the Milton Bradley flashes in the pan, like the F-16 combat game, Screaming Eagles, and the Rodney Dangerfield licensed game, No Respect.

Since I spent a lot of time studying board games one-on-one, I guess I was priming myself to become a board game reviewer. I talked board games on three defunct podcasts, and the occasional review popped up in my blog.  But even after reviewing three hundred plus games, I still have a fondness for the clunky, flawed, Milton Bradley games of my youth. That’s one of the reasons I started writing about popular games.  As backwards as a game like Monopoly is when compared to stellar modern games like Pandemic and Carcassonne, it’s still one of the most commonly played games. And that’s because for so many things it does wrong, it does a surprising number of things right. And that’s worth acknowledging. We can’t improve if we downplay our past successes.

I’m a security guard, and I work third shift. Every now and then I get caught up thinking about switching jobs, but then I remind myself that I’m currently working my dream job.  I get paid to sit, and take an occasional walk.  And my boss encourages me to write.  If I’m writing, that means I’m not sleeping. 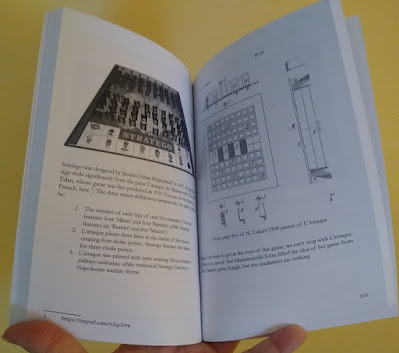 I had never thought about a security job on third shift as being a great place to get some work done? But that makes sense, that your boss would want you to stay alert. I remember a security guard at a plant I once worked at did puzzles all night.

I don’t think I can advertise third shift security work enough to anyone who wants to seriously write. I know a lot of people think it’s dangerous to be a security guard, but all of the buildings I guarded were well-fortified with alarm systems. My bosses are more concerned about roof leaks or the boiler melting down.  An actual event that I need to respond to might happen once a month.  In the meantime, I write without interruption, and I get paid.

Winning Streak uses the incredibly flawed Best Board Games of All Time list on Ranker and digs into each entry. There’s straight reviews in there, often for games I thought the general public might be less familiar with, such as the Battlestar Gallactica board game. With games like Stratego, I instead dug into the history of the game, and then the potential secret history of the game (Stratego might have evolved from a couple of older Chinese board games, but it’s difficult to say.)  Some games, like with Operation, I mostly cracked jokes. And with some games there’s already been so much said about the topic, so I jumped off the rails and told a different story all together. For example, I took a deep dive into the ill-fated Monopoly game show from the early 90s produced by the makers of Jeopardy, and tried to understand why it was such a miserable flop.

This isn’t a straight book of reviews or a history lesson. I’m a goofball, and it shows in my writing. This is a walk past a library shelf of board games as told via bathroom reader. And it’s got over one hundred pictures in it, because I’m bad at limiting myself.

I always love Bathroom Reader's. In fact, I think I have read almost every one of the Uncle John's out there. Can you provide us with a small exert of your book?

The Operation commercials always make the game out to be a farcical romp. Leering over this horror show of a body that is our unlucky patient, however, is as tense and nerve wracking as using your amateur skills to perform a real-life appendectomy with a gallery of doctors watching and tens of thousands of dollars on the line. Maybe more so. No amount of fake money is worth the stress of never knowing when the buzzing beehive in your patient’s nose will unleash.

Of all the crazy maneuvers in which your skills as a fake surgeon are requested, I’m most perplexed by the rubber band which you must remove, turn around, then replace in the opposite direction all while touching nothing, ever.

“Well, it’s not good Sam. It turns out your heart is upside down. I’m afraid we need to operate. Now I’m not going to lie to you. This won’t be easy. I need to open up your chest, remove your heart with a pair of tweezers, spin it around, then put it back inside without grazing any other part of your body. If my tweezers so much as touch anything, then your nose will explode. Needless to say if that happens, I won’t collect my standard fee of $200.”

That is great stuff! I really do wish you the absolute best in promoting the book and inspiring others to love board games. I know at my house we always enjoy game night. Before we close, let me give our readers your link one last time. If there was a first place you would want them to go, where would that be?

Htpps://www.winningstreakbook.com is the book’s landing page.  There’s a fun video there where I mostly flip board games into the air.

Hopefully no one will step on the little pieces walking to the fridge or bathroom at night! Thanks again for being with me.