Review: Me, Boo, and the Goob by William L Garner 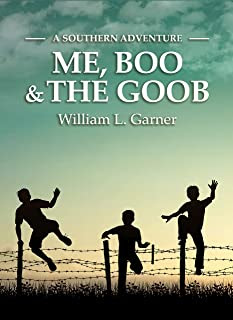 Today, we are talking to William Garner.

William has written the book,

Me, Boo and the Goob: A Southern Adventure.

Me, Boo and the Goob: A Southern Adventure

I had the opportunity to read your book. I appreciate the copy. If I can, I'd love to read my review here.

Me, Boo, and the Goob traces the story of a ten year old receiving a cadillac. The tale winds and turns well with every chapter being a different slice of the author's life. Sometimes the chapter may lose sight of the ultimate goal, that cadillac, but never the fun in the journey. The writing style reminded me a lot of Earnest Gaines, A Gathering of Old Men, even though the material was very different. I loved the prose and felt comfortable seeing the small town life through the eyes of William. His best friend, Boo, was a bit more initiative than say, Rowley on Diary of a Wimpy Kid . Maybe closer to Paul Pfieffer of the Wonder Years. There are tales of ghosts, explosions, guns, and fires to keep you turning each page. And like any good brother, William doesn't miss a chance to blame the Goob, his younger brother for his mistakes while also showing he clearly loves his sibling.  I read the book in two days and enjoyed the ride almost as much as I would a ride in a pink caddy.

Those were my thoughts as I read your book. Overall, it was a very enjoyable memoir. Can you tell us a little about yourself and what led you to start writing this account?

When I was in 3rd Grade, my allergies were so bad I could not go outside at recess.  In the winter, my fingertips would split and crack from the dry cold air.  So instead of going outside to play for a while, my teacher used to send me to the library.  I read.  I read everything I could get my hands on.  I read Thirty Seconds Over Tokyo.  I read Great Expectations.  I discovered Edgar Allen Poe and Mark Twain.  I read the entire World Book Encyclopedia A through Z.

"Some folks wait for inspiration to strike.

Writers sit down and just go to work."

I used to thumb through the Encyclopedia as a kid. I think most houses had a set. But I never read through it! That is incredible.

I bet you really developed a deep knowledge of history.

Early in the fifth grade, for a writing assignment I wrote about OSS (Office of Strategic Services) agents being parachuted into France at night during World War II to work with the French Underground.  I had read about the agents and their stories.  I had become a history nut of sorts.  I used to close my eyes and imagine what it was like to jump into night sky from an airplane hiding in the cold, darkness and clouds above a sleeping enemy.  I could almost sense the loneliness the agents must have felt hanging under the silk canopies as they drifted in the wind as they descending to the earth they knew was near, but could not see.  I wrote it like I saw it.  My teacher gave me an ‘F’, and accused me of plagiarism because according to her ‘there is no way you wrote this’.

By the end of the first 9 weeks, after several other writing assignments and a couple of parent/teacher conferences, she changed her mind.  She revised that grade, and I became her ‘star’ pupil.  For the rest of my academic career, whenever I needed to get my grade point up, I’d take a class that involved writing a paper.  I knew that even if I never became anything else, I would always be a writer.

That had to build a lot of confidence in you at such an early age. Were you ever given advice as a writer you would pass on to others?

Some folks wait for inspiration to strike.  Writers sit down and just go to work.

"Early in the fifth grade, for a writing assignment I wrote about OSS (Office of Strategic Services) agents being parachuted into France at night during World War II...

I used to close my eyes and imagine what it was like to jump into night sky from an airplane hiding in the cold, darkness and clouds above a sleeping enemy."

I've heard that before. Just start writing and the inspiration will come. Where do you find you get your inspiration, information, and ideas for books?

I get ideas from life.  My novel is based on my youth in Jonesboro, Arkansas and in Hernando, Mississippi.  I take things that actually happened and let my imagination run with it a bit.  Sometimes the actual true story is good enough.

Integrating your own bio into a story is very personal. Do your hobbies ever play into your writing?

I really enjoy scuba diving.  I became a diver in 1974 and have been an instructor for several years.  I also enjoy building things.  I built our pavilion out at our pool, as well as the pump house.  My hobbies don’t usually play a direct role in my writing, but when I am engaged in doing them, I do some of my best thinking.

I understand that. I'm a volunteer fireman and find a lot of my ideas come to me when I am doing activities for the station, even though I have never written anything about emergency services.

"If you’ve forgotten what it’s like to be a kid,

this is the book for you."

Shifting gears, what advice would you give someone who wants to be a writer?

Read, read read.  Read everything.  Read the classics.  Read biographies.  Read histories.  Read humorous novels.  Pay attention to the language and how the story is told.

Polishing.  Getting a rough draft down is tough, grinding work.  I really enjoy crafting the language.  It has to flow in keeping with the character and the story.  It ought to almost play a movie in your brain as you read.

I definitely agree about the movie being played out as you polish and edit. Do you write full-time or around another job? How do you schedule your time to write?

I am semi-retired, but my schedule is a mess.  Writing is ‘work’, so when I set down to write I block that time and write.  Even if I don’t keep anything I write that day, I write when I have blocked that time.

Me, Boo and the Goob: A Southern Adventure is a humorous story of three small boys growing up in a small town near Memphis.  The story is driven by the boys endless adventures and punctuated by their innocence, their naivety, their loyalty and their courage.  The story runs the gamut of small boy activities beginning with encounters with ‘ghosts’, including piano lessons, bad storms and bank robbers culminating with  the trauma of moving to a new town and making new in interesting friends.  If you’ve forgotten what it’s like to be a kid, this is the book for you.

Well, on the day after Christmas, I was sitting in the parlor with my big sister, Sweet Pea.  That isn’t her real name, but that’s what Mom and Dad called her, so that’s what everyone called her. She was sitting at piano practicing ‘Heart and Soul’.  I wasn’t doing nothing but picking sock lint from between my toes and watching her play.  She’s going to be a big star some day.  Last year on the fourth of July, they crowned her ‘Little Miss Lady of the Lake’ over at Sardis Reservoir and set off a bunch of fireworks because she was the prettiest girl there.  Mom has her learning how to dance ballet.  If only she could sing, she could be on Ed Sullivan’s TV show or maybe Lawrence Welk.

Anyway, I was getting down to some serious lint picking when I got this big tickle in my nose.  I let out a ginormous sneeze.  It was so big that it shook the whole house.  When I sneezed, I kicked out with my foot a little bit and accidentally kicked the leg of the end table that was beside the couch.  The table banged up against the wall.  This made the big, old, tall, skinny candle on the table rock back and fourth three or four times.  Each time it would rock, it would pause just a second or so at the peak of the swing, then it would flop back the other way.  Each time it swung, it got closer and closer to falling.  Finally, it swung just a fuzz too far, and it fell over against the wall.  It just leaned against the wall for barely a half a second.  The flame of the candle flicked up on that old wallpaper just like a snake’s tongue.  Quicker than you can say ‘Jack Sprat’, I jumped and snatched up the candle.

I have two projects I am working on.  One is a sequel to Me, Boo and the Goob.  This is a tough go.  The boys age some, and so do their perspectives and their adventures.  They remain, none the less, somewhat innocent and naive.

The second is related to my 30 year career as an Information Technology executive.  This book targets people who are new to the work force and helps them understand what they need to do in the first ninety days of a new job in order to be as successful as they can be.

Who are your favorite authors, other than the editors of Encyclopedia volume "T?"

Any plans for the upcoming holiday (this changes, but if we are near a holiday it can be a fun connect with readers)?

And I always like to ask, what is your writer’s kryptonite?

Interruptions.  I have to focus, and dive deeply into the story I am telling.  I can not be completely invested in my story if my brain keeps getting yanked out to answer the phone.

Thanks for talking. One more time, where can someone go to purchase your book?

My book is available by order at Barnes and Noble, Books-a-Millionand and almost any local bookstore.  It is in the catalogs.  It is also available in hard-copy and in a five CD Set via my website, williamlgarner.com.  Audible.com has the audio version.