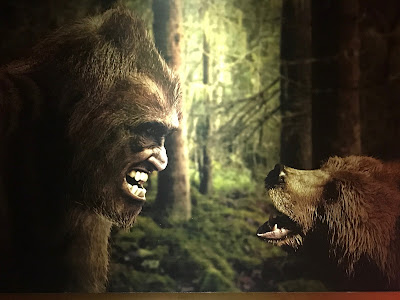 I"VE BEEN TO THE RESEARCH MUSEUM!!

My family asked me what I WANTED TO DO. This is rare. I usually get asked if I would like to do something. Seldom do I get to choose. So, naturally, I said I wanted to day trip to the nearest BigFoot museum.

My closest one is in Cherry Log, GA right outside Elijah.

I met a little resistance at first, but the 13 year old won the day with her decision to accompany me on my day quest.

When you pull up to the museum you immediately know you are in Sasquatch country. You are in the valley between several mountains, one side being a national park. Just inside the door is a board where people have pinned their personal, local sitings. 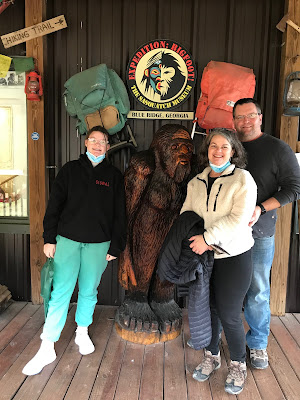 Inside, you purchase your museum tickets (a mere $8 per attendee). Then your host opens the velvet rope and lets you into the exhibit. This will not be the last time you see red velvet though. Among other items, the museum hosts a certified plaster butt print of a BigFoot sitting on the velvet cloth.

In addition, there are small tv screens with eyewitness reports. We saw national guardsmen who entered the woods for a seek and rescue operation (downed helicopter - the museum had some of the wreckage). At the crash site they came face to face with several "Wild Men."

There is the very convincing man in his Carhart overalls (also on display) that met a BigFoot face to face in his tree stand. He had a harrowing experience outrunning it and its friend back to his truck.

But lest you think this is all for show, they also have casts of footprints, verified pictures, recordings of BigFoot at night (thats the one that took one of my family members from a 3 to a 6 on the "I Believe scale"). There are historic accounts from around the world, newspaper clippings from all over, maps, and this great listing of BigFoot diet preferences: 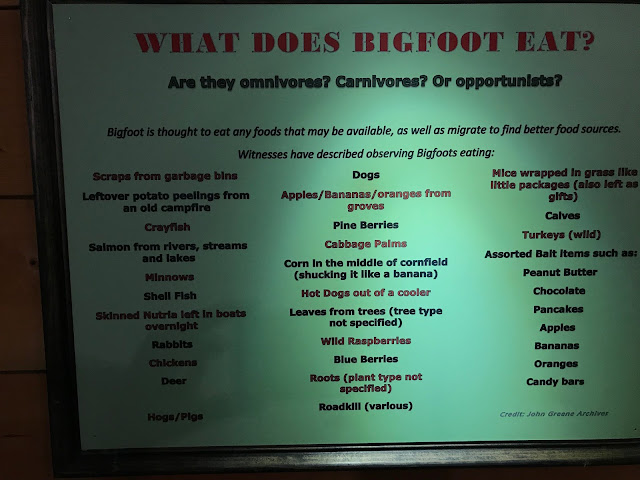 sorry for the poor film quality. There is something about Sasquatch research that leads to such fuzzy filmography. But I promise this sign was not a fabrication. It was really in the museum.

My family all left captivated. Everyone, whether it was the one who said they were a "1" or me (I went in as an "8" on the "I Believe" scale) came out more a believer.

And the good news is that these museums are all over the country. People who love BigFoot (one man we saw a video of witnessed BigFoot 40 years ago and is still on the hunt for a second glimpse) want to share their findings.
Here is the one I attended:
Expedition: BigFoot!

But there are many, many more around the country and around the world!

Yes, we did go on from the museum to visit an authentic mine. We panned for gold and saw how miners lived in the 1800's. Yes, we ate southern style (fried chicken, cream corn, green beans, pot roast, mashed potatoes, fried okra, cornbread, etc...) at the Smith House. We even walked the town square in the little nearby town of Dahlonega, GA. But on the way home the talk was still all Sasquatch.

I for one, can't wait for my family to grant me another day to decide our path. It may be a while, but if there is one thing a true believer must have - it is patience. 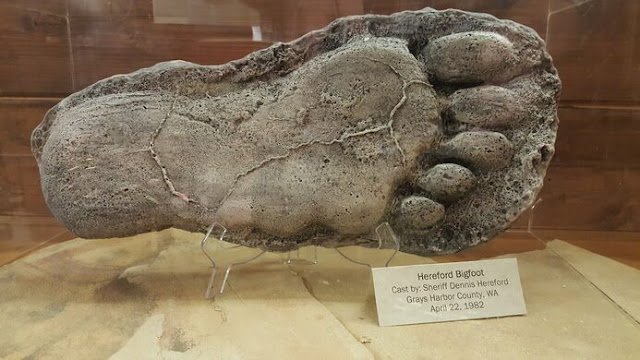 Finally!  A state with some sense for increasing revenue AND giving people what they want!
And what is it people want, you ask? Stimulus checks? Better jobs? Lower interest rates?
Hell no.
Big Foot. Stuffed and mounted over the fireplace.
And Oklahoma, once the land of the pioneer looking to make a new life for him and his family, has opened up yet another great opportunity. They have legislation on the table to provide an official Bigfoot hunting season.
Watch the video here!
In January, 2021, Oklahoma Rep. Justin Humphrey made a move that will place him on Mount Rushmore one day. He introduced a bill to the state legislature to open up licenses for Bigfoot hunting season. 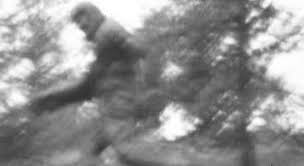 There seems to be some debate whether the Big guy even exists. I did a quick google search and came up with incontrivertible truth. Incontrovertible  coming from the Latin: Incontro meaning "super fuzzy" and veritable meaning "out of focus picture
You may not be convinced, but be aware that the FBI have an actual file on the Big Guy. This article tells you all about it... well... except like any good conspiracy the forms are redacted and you have to subscribe to the History Channel newsletter to read all about it.  Link Here
The good news for you and I is there appears to be no test for belief. The casual hunter and the dedicated Bigfoot man of lore and legend alike can apply for a license, so long as it is the appropriated season.
Read the article here! 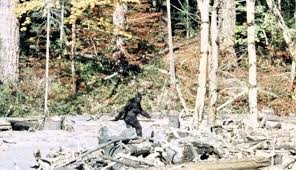 Now, I know what some of you are thinking. Hey! Isn't Bigfoot on the endangered animal list? I mean... how many of them are there? Depends on who you ask. But the bill as it is currently given only allows for trapping. It doesn't, however, come with a $25,000 reward.
Now, one expert I heard from says there are actually thousands of them. Just saying. And apparently they like to sneak around at night, look in your windows, and eat your chickens.
Local Bigfoot sightings in Tennessee AND a museum!
This is probably wise and will certainly help people from shooting their mother-in-laws or ex's thinking they had the actual famed beast in their sites. And it will keep the environmentalists at peace with the fact that we in America still want to know the answers to the great questions: Does God exist? When does a cupcake become a cake? And is Big Foot real.
I for one am a believer. And I will definitely be loading up the wagon and hitting the trail to Oklahoma if and when season opens.
Posted by Jerry Harwood at Monday, February 08, 2021