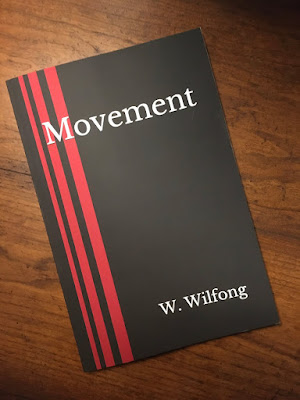 Today, we have an opportunity to talk to William Wilfong.  William has written the book, Movement.

I grew up in Richmond, VA before moving to Chattanooga in ’97. I’d always had a love for reading and writing short stories, but some of my short stories seemed to grow and grow to the point that I thought there might be something interesting in them. Crazy dreams, spicy food, and my inability to find something good to read all led to the conclusion of Movement and a half dozen other projects in various stages of completion.

Sadly, writing is a part time gig for me at this point, but I can dream. I try to set aside the late evenings for writing as I do my best work when the house is quiet and everyone is settled in. Sometimes I will go months without touching a draft before leaping headfirst into it and spending days in front of the computer.

Every idea I’ve had has been the result of some crazy dream that I’ve been lucky enough to remember. I’ll wake up and scratch the idea down on a piece of paper, and then spend some time alone on the back porch of an evening fleshing it out to see if there’s a story somewhere in the sentences. 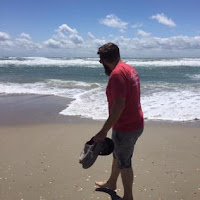 That's great! I can never remember my dreams, but I have used some of my wife's remembrances before.  What are your hobbies and do they ever play into your writing?

I’m big on spending time in the outdoors whether it be fishing, camping, or hiking. Peaceful surroundings definitely play a role in helping my mind get freed from the stress of life and help lubricate the gears of creativity.

Read Stephen King’s “On Writing.” There are some things in this book that I wish I had known much earlier in the journey. There’s an excellent section in it about not plotting your book from end to end, and letting it flow organically. In doing so you create a book that is predictable to the reader, and if the reader knows how the book will end from the start, then it’s not a good book.

I've read On Writing twice.  It and a great course I listened to (How to Write Best-Selling Fiction by James Scott Bell) have been the most influential to me.  King's book, in particular, is great.  Shifting gears, please tell us about your current release.

I released Movement in December of 2019 just after the birth of my first son. It’s actually the fourth book I’ve started, but the first I’ve finished. It’s on the small side at around 80,000 words, but it’s had good reception with friends and family.

I haven’t spent nearly as much time promoting it as I had planned, so I really need to get on that.

By far it was buying my own ISBN number. Don’t give the rights to your hard work away.

Just for our readers, let me provide the description on the back flap:

Was it a chance meeting or was it meant to be? For Jacob Thornton things had never come easy, but meeting Sarah made for a love that transcended time and space. She saw something in him, and ability, that he didn't even know existed.
This is more than a love story though. This is a story of deceit and cover-ups; a story where finding out the truth of your past is just the prelude to outrunning it long enough to have a future.

I’m not sure. I have few and I can’t decide which direction I want to go in next. Having a kid put a slight hiatus on writing, but at seven months Ben is sleeping through the night and allowing some free time in the evenings.

The two that show the most promise are Expat with a word count of around 150,000 and Hole In The Dirt (bad working title) with 40,000 words. Despite the title, I think the second will be the next to finish. Think along the lines of something ancient from below coming to the surface with a millennia of hunger, sharp claws, and the intelligence of pack hunters. It follows how several people from varied backgrounds fight to survive, fail to survive, and work to find a way to stop these creatures.

That sounds like a fun read! I know your free time is limited with a newborn, but who are your favorite authors to read? 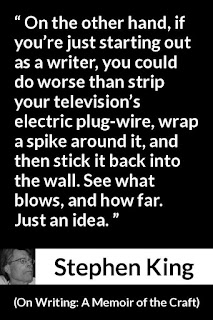 I would have to say the television. Good documentaries and murder mysteries turn me into a couch potato and keep me from my work.

I think we all are susceptible to the draw of television.  It reminds me of a quote from King.

Thanks for joining me.  One more time, let our readers know where they can purchase your book?