Well, I am coming to the end of the StoryADay challenge.

Here is one generated by the prompt (retell a nursery rhyme) and my recent completion of reading The Outsider (now I can watch the series!)


Choose a nursery rhyme.
That is going to be the plot of your story.
The key with this exercise is that now choose an author whose voice you love.
Write that story with that character, but in the voice of the author you chose.

What Does A Vampire Eat During A Plague?

Johan had seen the stark man the last time he left town.  He was not exactly asking for a lift out of town, but stood by the town’s boundary marker.  Johan considered it an odd place to stand, under the town’s sole elderbush, a half a mile from the nearest home or store.


Johan tipped his hat toward the stark man.  The man looked inquisitively at Johan but said nothing.  The only response was a facial contortion that Johan took to be an effort to smile.

In the next town over, Johan confirmed the news.  There was sickness, a great mortality, crossing the land.  Shops who bought his woolen wares were closed to him.  Everyone in the town said that they were not allowing visitors.  He was requested to return home till the sickness passed.

When Johan asked how one might know if they have the illness, an old lady told him from an upper store window, “You will smell it into your system.  It is the odor itself that carries it.  You need not touch nor be bitten.  So protect your nose in these dark days.”

Johan pulled his team of mules back into Coppertown late that evening.  He had made no money and pondered how he would sustain a family on the meager amounts they had.

The stark man continued to sit by the elderberry tree.

“You are back early.  Did not expect you for a few days,” came the man’s words.

Johan was startled by the unexpected comment and moreso by the speed with which the stark man pulled alongside his mules and wagon.  The stark man placed a hand on the mule’s neck.  Johan was uncertain, but thought he saw the stark man lick his lips.

“An illness has set in over the area.  No towns want traveling merchants.  Best you stay isolated yourself, if you can.”

“Always do,” came the man’s reply.  He turned and left Johan, retrning to the elderbush.  Johan could not be certain, but he felt the night air warm several degrees as the man moved away.

At home Johan’s wife came outside.  “Johan, you have returned?”

“There is an illness set over the area.  No towns want a traveling merchant.”

“Did you make any trade at all?”

“All I traded was a sore back in exchange for a day away from you.”

“Well, come in.  I have some leftovers you can have for supper.  And go see your son.  The strangest rash has surfaced on his neck.” 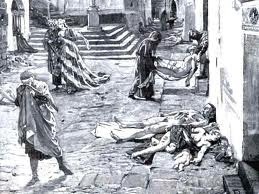 A Pocket Full of Posies

Johan finished burying his children and wife in the back yard.  His own illness still had him weak.  His chest was tight and he had no appetite.  Not that there was food to eat.  His trip into town was not from desire to be with others nor to report the loss of his family.  He told himself he was returning to his home.  However, as he packed his travel wagon with anything of worth, he knew that he would never come through the threshold again.

The doctor who had visited had worn the face of a vulture.  A hollowed out beak with leather masking.  He had said it was important to do so.  The odor was the culprit of transmission.  Stuffing the beak with flowers was the best preventative.  Johan made a makeshift version for himself from a beak his son had on his nightstand and some of his wool to trade.

He did not look back at the homestead.  The failed crops, the unmarked graves, and the roof that needed repair that spring.  He would move on to the town of his birth, Taurus.

On the short road into town he saw a lady attempting to dig a grave.  He tied up his mules and garnered a shovel from his collected belongings.  As he put tool to earth, he noticed there were two holes.

“You will save work digging the one deeper,” Johan offered as he moved a scoop of dirt to the nearby pile.

“Can not bury her with the others.”

Johan looked at the body of a teen girl.  She had the festering buboes and the rash.  He adjusted his beak to be better heard.  “She had the illness, same as the others?  The good Lord will surely not mind in such a time.”

“See her neck?  She did not die from fever.  Hers came from a darker villainy.”

Johan walked to the girl.  Her neck had two holes pierced in her neck above the shoulder blade.    There were fingernail marks along her throat.  It looked like someone had pierced her with an odd two pronged awl.   “Who would do this?  What is this?”

“She said a man tall and gaunt approached her.  Scared, she ran.  He caught her and bit into her neck.  She thought her life to be over, but he threw her aside.  Said her blood was foul and tainted.  He could not tolerate it even though he was starved.”

“Sounds to be a man possessed.”  Johan and the woman spoke no more.  A body touched of the devil must not be in a Christian grave.

The town center of coppertown was desolate.  Outside the church there were monks filling in another layer of dirt in a mass grave.  He saw a priest carrying a wheelbarrow with two bodies.  He had the tell - tell rash as well and the buuboes festering on his neck.

The city looked as a snow storm.  Johan almost took off his beak to catch one in his mouth as he had in childhood.  As he rose his hand to the task, he saw it to be ash.  Ahead, he saw the burnt bodies rising up into the air.

Johan stopped by his life long friend’s smithy.  He paused, fearful the man was already in the ground.  Relief came as his wife peeked out the window.  A moment later so did his friend.

“Johan, we prayed for you and your family.”

“You may trade your praeyers for tears, I am afraid.  I buried them all yesterday.”

“We are sorry, my friend.  We lost our daughter.  We are staying inside away from the stench.’

“When this ends, my homestead is yours.  I am going to see if my parents survive.  I will stay and help them or take the family farm to my own plowhand.  Either way, there is nothing left here for me.”

“My son and his bride will take your property under good care.”

Johan nodded and urged the mules forward.   His body was covered in ash.

We All Fall Down

The stark man stood on the roadway.  Johan stopped.  The man gave again his contorted smile.  Johan noticed his two upper teeth were unusually pronounced, perhaps a result of his starvation and illness.  But the man showed no signs of the illness that took Johan’s family.

“Sir, are you sick with the illness?”

The stark man extended a very long fingernail.  “I have not and the illness will not come upon me.  I am, however, bound to this elderberry tree, without hope for future sustenance.  There is nothing left for me in a town consumed with plague.

“I am leaving town.  You were here three days ago and appears you have no other home.  I can not offer you succor beyond the trip, but if you desire you may ride with me.”

The man again petted the mule.  This time Johan saw without doubt the man lick his lips.  The pronounced teeth hesitated to return inside the man’s lips as he recoiled his tongue.  “I can not leave the town except by invitation to another.  Some have said it is unto a specific house that we are prevented from entering.  However, that is not the entirety of the truth.  We may enter no land unwelcomed whether it be a homeowner’s small cottage or London itself.  A resident must first extend invitation.  And you are no resident of Taurus, I fear.”

“I was born in Taurus.  I have no idea if they will welcome an outsider, but as a child of the city, I am allowed.  And you are still welcome to the ride.”  Johan patted the seat beside him.  Strange company would be better than none in the two day travel.

The man rose to the seat without use of hands.  “Then I thank you.  The food in this part has turned sour with plague.  Even the sweetest virgin morsel no longer holds succulence.  It is a hard time to be one who walks in the shadows.  As my food falls ill, the normal hunger pains become screams of agony.  But perhaps in your home village we both shall find greater comfort.”

Johan snapped the reigns and the mules moved past the elderberry tree.  The coldness he felt when stopped did not lift.   Johan shuddered.  He looked to his traveling mate.  The stark man, thin and frail, seemed unconcerned with the frigid night.  The two continued on in silence through the night, both carrying within themselves a cursed death.
Posted by Jerry Harwood at Tuesday, May 26, 2020