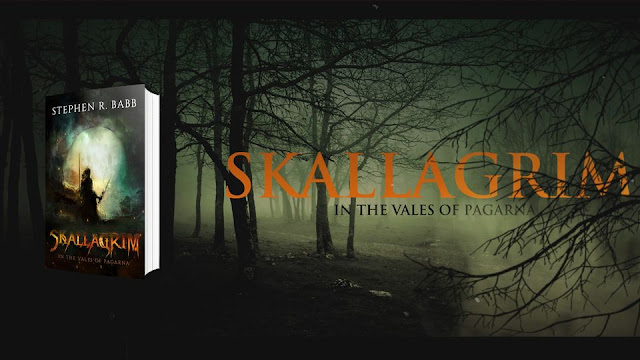 Babb's Skallagrim is a tour de force. It recalled for me all the love I had of the DragonLance books. It has some nods to the great epic fantasies such as Tolkein including a great scene at the end on the edge of a pit. But make no mistake, those familiar moments are intertwined into a unique and riveting story.

The beauty of the work is the language implemented for the high paced, immersive action. Babb is by profession a songwriter and it shows. The novel has almost an epic Homerian quality. It drew me back to the sword and sorcery books I loved in my childhood.  Yet here the imagery has the masterful twist that offers enough to ignite imagination without smoldering it.

The story is a classic chase-after-the-princess quest with enough twists, turns, and surprises to leave you enjoying the ride and satisfied with the ending. You might even sit back and blow a few smoke rings on your pipe as well as you wait for volume two. The plot flows well and gives satisfactory conclusion while still setting up future offerings. However, the real joy of the book for me was not the superb plot but the simply fantastic monsters. For example, here is one nasty encounter with a ghoul:

"But this was a monster, a ghoul, a thing of legends, born of horror and death. The sorcerer's arrogant, leering visage was nothing compared to the malevolent, hateful face that hovered inches from Skallagrim's own, slinging venom in every direction as it strove to deliver a bone-crunching bite to the thief's head. Skallagrim could hear more than see Swanhild beating the ghoul with his staff, which at least had the effect of distracting the fiend from his attack."

And one of my faves (I'm a sucker for the dark that is both terrifying and tantalizing):

"every time he considered walking out on Forneus, his mind was inevitably drawn back to the door and to the whisperer in the darkness beyond. Such promises it had made. He dreaded the sound of it but was fascinated by it as well. Those whispers, like the exhalation of a dying man, had thrilled him, filling his mind with visions both ghastly and grotesque.... Straker was a killer with a killer's heart, but the whisperer in the dark was death itself. 'Come down and dream with me, my son,' it had said. 'Cast aside your doubts and fears. Come down, confess all to me, and I shall make you whole, for I am the Father of Death.'"

Overall, I would highly recommend this read for any and all epic fantasy fans. Further, Stephen Babb is part of the band Glass Hammer and they have two albums connected to this book. I have yet to listen to them, but can't wait to see how they play out some of the work. If done with the same careful hand this book was given, I imagine they are fantastic and offer an even deeper level of craft to the world of Skallagrim.