Chattanooga Writer's Guild just celebrated their twentieth anniversary. That is a great milestone for my city.  I became involved with them through joining a writer's group that meets in Hixson (well... during the pandemic online). My group produces a collection of short stories called Crazy Buffet. The name came because the group initially met in a restaurant called the Crazy Buffet. Actually, it was the second restaurant they met in. The first one closed.... so did the Crazy Buffet... and we moved to a local BBQ. Our next anthology was Crazy Buffet: BBQ Edition. Then the whole world shut down... I don't think this was directly our fault but who knows how history will remember it. Thus, our last was Crazy Buffet: Curbside Edition. We always give our profits to our local university young writer's group.

My group is an amazing group who have helped me with my writing, assisted me with technology, led me to conferences and online resources, and mostly, encourage me to write. Oh, and we enjoy good fellowship around a table. If you are local, consider joining us or one of CWG's other groups:

You can see where the Chattanooga Writer's Guild interviewed us HERE.

For me, a writer's group is a critical piece for someone just entering the writing path or for someone who has felt stuck in writing. My other group (super fun group writing good pulp fiction!!) asks every month what my word count is. Some of us produce thousands and some less than five hundred. There isn't a competition. Rather, it is an opportunity to celebrate what we've done, encourage those struggling with writer's block or other life issues, and build friendships.

As for the Writer's Guild, itself, I would encourage you to look at their website if you are local to the Chattanooga area.

Here is their History: READ IT ON THEIR WEBSITE 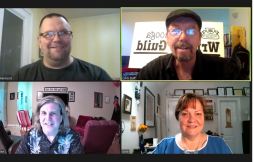 The Chattanooga Writers’ Guild (CWG) was organized in 2001 by Rebecca Cook and Jennifer Hoff, both graduate students at UTC, and Helga Kidder, a graduate of Vermont College, who was approached to help the women organize the group. It had around 20 members. Ms. Kidder agreed to help, and then created a poetry group. Prior to launching the CWG, the founders organized monthly poetry readings at UTC (called Poetry Mondays) to see if there would be an interest in opportunities for writers to share their work. Ms. Hoff said, “Because of the success of Poetry Mondays, we decided to explore the possibility of a larger writing group to serve all genres, modeled after the Knoxville Writers Guild.”

CWG’s first meeting was held in the Faculty Club at UTC. To make things more challenging, it was scheduled on Tuesday, September 11, 2001. “Amazingly, we had over 30 people attend the meeting, and many commented that it provided them an outlet to escape the tragic news,” stated Ms. Hoff.

Ms. Cook served as the first president and Ms. Hoff as vice-president. There were only two groups: poetry and fiction. “We were advised against organizing, not because it wasn’t a good idea, but because there was fear there wasn’t enough interest in the Chattanooga area,” stated Ms. Kidder. “They were wrong,” she added. The CWG has grown to support nearly 350 writers in our community. It serves both experienced and new writers in a variety of genres with a goal to help all improve their writing and achieve their writing goals.

The CWG soon needed to hold its meetings in a larger facility, so they partnered with the Chattanooga-Hamilton County Bicentennial Library. Meetings are held on the second Tuesday of each month except September and December. This partnership has proven healthy and beneficial for both parties so far. As the CWG grows, future boards will have decisions to make on parking and space issues, but for the time being, the CWG has a home in the auditorium of the downtown library.

In 2004, CWG achieved non profit status, 501(c)(3). This gave it the ability to look for grants and seek alternative means of support for workshops and future writing contests. That year also brought the CWG to a new level of organization with bylaws and a board of directors elected by the general membership. The CWG also began an aggressive plan to offer free writing workshops for the general public, with the first being held in 2009 in conjunction with the St. Andrew’s Center. In 2010, another was at the Chattanooga-Hamilton County Library. Two workshops were held in 2011, the first at the John A. Patten Recreation Center in Lookout Valley and the second in conjunction with Dalton State College in Dalton, Georgia.

In 2009, the Chattanooga Writers’ Guild Newsletter was first published as a weekly emailed message and reached any person who signed up to receive it. It has evolved into a more comprehensive newsletter sent out once or twice a month. It was also this year that the CWG Board of Directors held its first long-range planning session that led it to begin rebuilding the CWG website.

One of CWG’s benefits to its membership is a variety of critique and writing groups, such as fiction, poetry, and creative nonfiction, but also specialized groups focusing on speculative writing, Christian markets, etc. Members have the liberty to form groups with Board approval.

Each year, the CWG provides excellent programs that serve the community. These include readings and craft lectures by celebrated voices and workshops that prompt creative writing, as well as teach the nuts-and-bolts of publishing. In addition to these programs, the CWG holds a September annual meeting, when officers and directors are elected, and the December Christmas party; both are potluck events.

With the election of new board members and new officers, the health and energy of the CWG continues to grow, as does the membership. As the three founders envisioned so many years ago,  CWG is meeting the needs of local writers in ways that continue to grow and expand.

I was recently nominated to the board of the CWG. I'd be happy to talk with you about membership if you are in the Chattanooga area. (If not, I'd encourage you to find your nearest groups!)

A writer in Chattanooga? Consider joining the CWG. Membership is affordable and it is a great network for you. Equally important - we need you! Writing is not a competition. I don't fail because someone reads your book. I succeed the more we promote reading!