I know. That art is awesome. It reminds me of the work of Wendi Pini I used to read back when I was younger and you could snag a comic for fifteen cents. I have always loved comics and graphic novels. My friends and I growing up would subscribe to different series and then swap comics each week as they arrived in our mailbox. I had a box at a comic store for years where I would go dump a huge part of my paycheck each month. 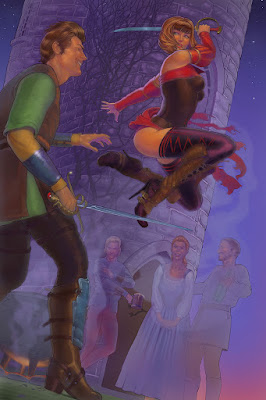 Like most of us, I have enjoyed the advent of cg animation and special effects that allow movies to portray almost real comic book action. However, there is still nothing like the smell of fresh ink and the imaginings your brain produces between the panels.  I think that is why I love comics. You have the visual stimuli but not all the thinking is done for you like it is in a movie. And unlike a movie, you are in control of the pace.  So, it was a real joy for me when David Doub and I connected over his kickstarter and new work: Little Deaths.

And today we are promoting the new work, Little Deaths.

There is a kickstarter for the project.

David, Can you tell us a little about yourself and what led you to start writing?

I’ve been an avid reader all my life so it only seemed natural that I would become a writer.  I so wanted to make stories and entertain people just like what I had read.

I remember when I was young I had two little writing projects.  One was in this little notebook I had, I tried to do my own version of James Bond, called Max Louket.  I was obviously very much in a James Bond phase then, watching all I could.

Who was your favorite Bond?

Roger Moore was my favorite because he was the modern one at the time and had all the crazy scifi stuff, like Moonraker, a kid like me loved.

What was your second project?

Another one was a superhero comic, called Pulberizer (I was trying to spell pulverize).  It had supporting characters like Metal Man and his sidekick Metal Dog.  The villains were Blowhard and Lady Blowhard.  These were all very serious names for very serious comics.

Those sound like names from a Bond movie or from a game that is tongue and cheek.

I love to play table top roleplaying games and some of those sessions sometime turn into comics (after I scrub off the copyrighted material from the games).

Dusk, the comic I’ve worked the most on was born from Vampire Roleplaying games, including Live Action 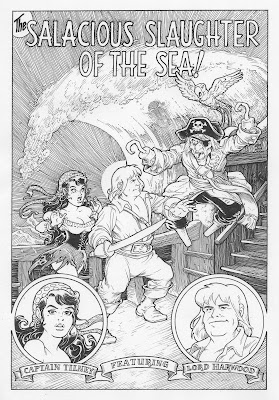 Miss Tilney, is actually born from a Dungeon and Dragons game.  There is a subset of D&D called Ravenloft.  Ravenloft is medieval fantasy like the rest of D&D but it’s all gothic with Vampires, Ghosts, Curses, and No Hope.  There is then a subset of Ravenloft called The Masque of the Red Death.  That setting is set in the 1890s Earth but has magic and monsters in it like Ravenloft

That sounds awesome. And I love that there is a character named "Lord Harwood."

So you have written and published several titles it looks like. In D&D and similar games characters always have a weakness. Do you have one you would identify as a writer? Your kryptonite so to speak?

Ultimately, it’s frustration.  Frustration makes me a sad and bitter person.  I will blame everyone and everything on why my books are doing better when I frustrated.

"What I always say is you have to write to get past that fear. That’s why I think starting small makes the fear less in a way."

But that doesn’t help.  It just makes you angry and pushes away potential readers because who honestly wants to be around all that negativity.

So, while I still get frustrated, I try to catch myself in negative behavior and work on positive solutions to help promote my comic better.

It’s aliens from space that are sabotaging my comic success.  They are in orbital and beaming subliminal messages to keep people away from my obviously awesome comics (J/K) 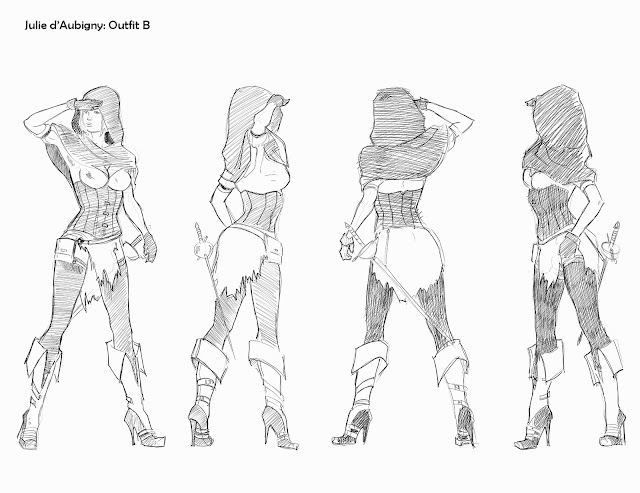 Little Deaths is based on the historical person, Julie d'Aubigny (1670/1673–1707), better known as Mademoiselle Maupin or La Maupin.

She was a very colorful character who lived her live her own way.  She dueled, sang opera, bisexual.

The most famous story about her is a popular meme (hence how I found out about her) is how the parents of one of Julie’s lesbian lovers sent their daughter to a convent to escape Julie and her influence.  In turn, Julie also joined the convent as a postulant (a candidate of the convent) to take her lover away.  To cover up their escape, Julie dug up the corpse of a dead nun, placed it in her girlfriend’s bed and set fire to the room.

But yours has a bit of magic in it as well from my read of the work?

So we took this already wild character and added some supernatural elements and started making wild comic stories about her.

To do it.  I know that sounds simple, but I’ve seen to many writers who worry too much or set themselves up with goals that seem impossible (like say writing a 100 volume epic).

What I always say is you have to write to get past that fear. That’s why I think starting small makes the fear less in a way.

It’s easy to produce and edit say a short story (or short comic) and if you do fail, you can do it again with minimal effort over and over until you get to the place you want to be as a writer.

That’s why I like anthologies and collections because it helps gather up shorter works and promote them as a whole.  Strength in numbers and all that.

Shoot, my first Graphic Novel, Dusk started as one short, and then another, until for that title I adopted the format of doing short separate comic stories in each Graphic Novel.  It fit the aesthetic of Dusk so I could easily shift tones.  I could even make the lead the hero in one story and then the villain in the next

That is great. I have the opposite tale. I started writing a graphic novel with a buddy who does the art. His life went crazy during COVID so it turned into a novella Three Ravens picked up.

Shameless Self Promotion here: Twelve Hours on the Block by Jerry Harwood
So, What exciting story are you planning next? 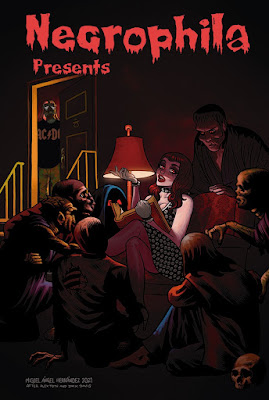 The next project I am working on is called Necrophilia Presents, which is a horror anthology.  It’s named after the front woman of a local Dallas Texas band called the NecroTonz, an undead lounge act.

The horror anthology is filled with more relevant topics brought more into the light because of the pandemic.  Like one is called Mask It or Casket It where a psycho starts surgically attaching masks to people.  It’s obviously born from my frustration with people who don’t believe in science and we’re in actual pandemic.  It was hard work to write the story that wasn’t just wish fulfillment and show how in an war of escalation no one wins.

That is true. I have read stories often that seemed more treatise than fiction, more indoctrination and axe-grinding agenda than fun. It is good you are thinking about that balance as you write and I will say from what I have read of your work it certainly comes out.

David offered me a preview of Little Deaths. I have to say that the art was tremendous. It reminded me of Wendi Pini who is probably my favorite illustrator. I loved the characters and the storyline. While I am not part of the LGBTQ community, I have many friends who are and I love the voice this work gives them. But beyond it being a character who is different in an era when different was possibly criminal, the story is just damn good. I loved the interspersion of french where there really didn't need to be any translation. That was a great technique. The dialogue overall brought the images to life and made a compelling read.

I know when my friend and I talked about doing a graphic novel with my Aztec God story I was really surprised at the cost.

With comics there is a lot more costs because you have to pay for art, coloring, lettering and such.

Now you have a kickstarter. Tell us about that. What is it for?

Getting my books made and published.

I know there is a section of readers and writers who look down at people who self-publish, but for a lot of us in comics, it’s really the only way to get started.  Shoot, besides a few of the biggest publishers like Marvel, DC, and Dark Horse, most publishers can afford to fund a comic and you have to come to them with the book already finished.

That’s why in recent years crowdfunding, like Kickstarter, has been a great way to fund book without having to do it all out of pocket.

Check it out here: KICKSTARTER

When I started though crowdfunding wasn’t really a thing, so I had to pay out of pocket.  I’ve always viewed it as an investment in my future.  I also try to help others get their stuff made because I know how hard it is to get a comic made.

That is awesome. It is why I do this blog. I love to see others succeed. Ultimately, we all want people to read cool stories. The more people read, the better success we as writers will have. I wish you the absolute best on Little Deaths.